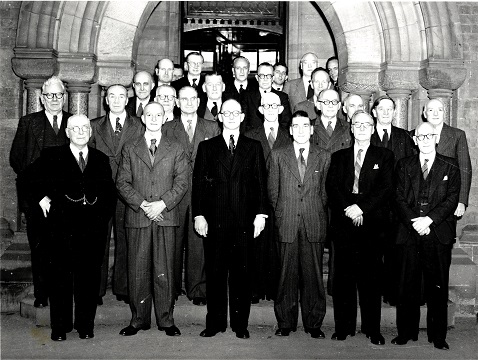 This group photograph of long service employees and senior managers from English Electric (EE) outside Willans Works on Newbold Road (now GE Power) was taken in 1954 and was followed by a tea in the lounge.

Central at the front is E.M. Price, then General Manager at Rugby and a key figure in the company management during the post war years. In 1939 he joined the company as an Engineer. As the son-in-law of the Company Chairman he began a rapid rise through the ranks ultimately becoming one of the six senior Company Directors. During the Royal visit in 1967 he conducted the factory tour. HRH The Duke of Edinburgh mis-identified the inlet and exhaust of a gas turbine leaving Price in the awkward position of having to correct him, earning himself a slap on the back. In 1969, EE was incorporated into the General Electric Company (GEC) and Price became the only former EE Director on the GEC Board.

On the far left of the second row is Frank Barratt, the Senior Foreman of the Heavy Machine Shop. He joined Willans & Robinson in 1912. He became Foreman of the Heavy Machine Shop in 1936 and remained in this role until he retired 1960. He was remembered as the last of the traditional Foremen who continued to wear a bowler hat as a symbol of his office.

Just visible in front of the door on the right-hand side is Jim Souter, then Manager of the Foundry at the Works. He joined EE in 1946 and became General Manager at Rugby in 1965. With the integration of EE into the GEC conglomerate he became Managing Director of the new Turbine Generators Division. He was considered something of a hothead. On one occasion he supposedly tried to sack a delivery driver whom he caught smoking, only to be informed that the driver did not work for EE in the first place.

Behind the group is a mahogany revolving door This was removed in 1967 when the Queen visited.  The door was salvaged by an employee who was also keen on woodwork and made it into a corner cupboard.

In collection(s): Every Object Tells a Story