The Souls of Black Folk: Handwritten drafts of Chapter 13 "Of the Coming of John", Chapter 14 "Of the Sorrow Songs" and "The After-Thought" 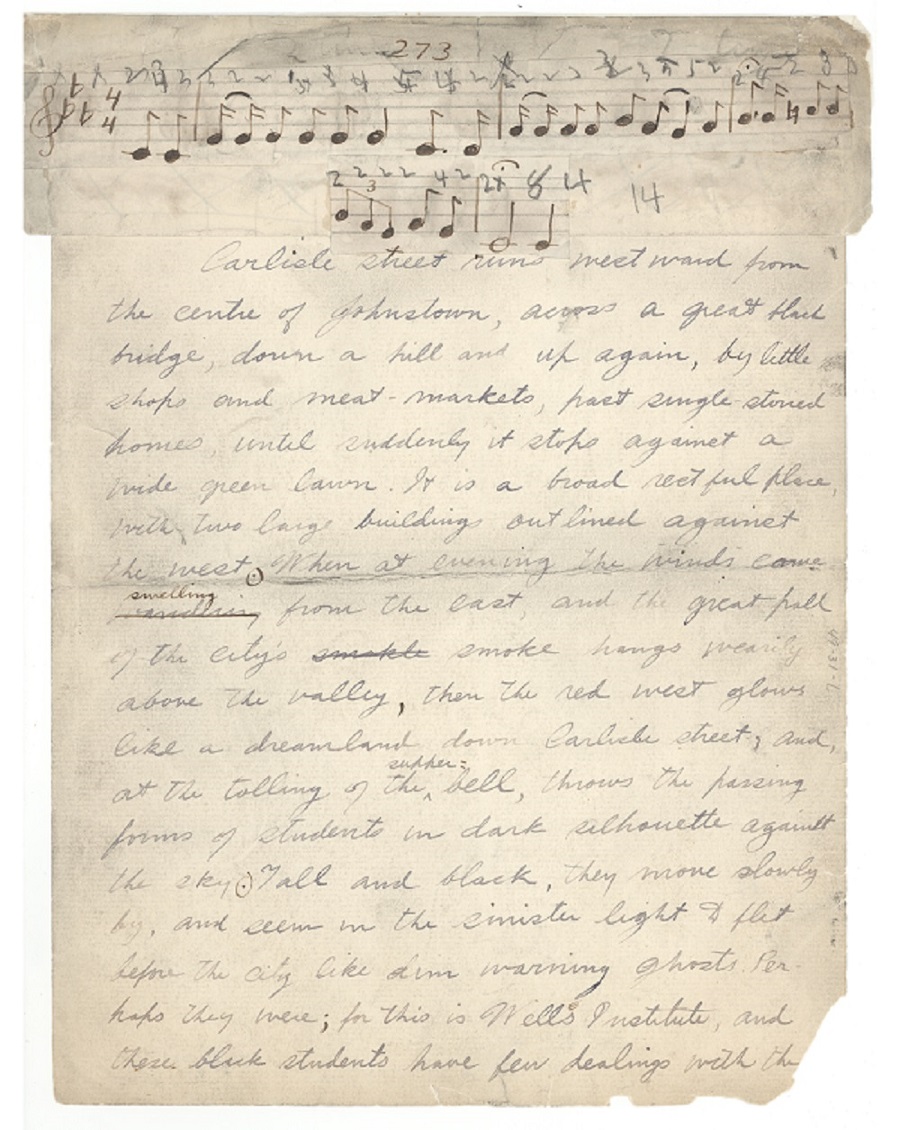 W. E. B. Du Bois’s best known work, The Souls of Black Folk, was published in 1903 and remains a classic of American literature. The book takes the form of a collection of essays. The varied character of these chapters helps Souls defy easy classification – it is simultaneously a history, a cultural study, a memoir, an indictment, a testament, a challenge, and a plea for change. The language is rich, and steeped in moving, poetic imagery that is deliberately designed to have an emotional impact, and to force the reader to recognize the humanity of black people. To this end, the Sorrow Songs are presented, with musical notations, as if Du Bois is giving voice to lives long since extinguished, and those still living who had no mouthpiece. He describes these songs as “a haunting melody from the only American music which welled up from black souls in the dark past.”

The Souls of Black Folk did not spring from the ground, fully formed. But is the product of over a decade of research and scholarship by Du Bois on the history, culture and lived experience of black Americans. He boldly recounts his own experiences too, most poignantly in the chapter, ‘Of the Passing of the First Born”, where he describes the loss of his son Burghardt to diphtheria in 1899.

The influence of The Souls of Black Folk was immediate. As William H. Ferris wrote, “Du Bois isone of the few men in history who was hurled on the throne of leadership by the dynamic force of the written word. He is one of the few writers who leaped to the front as a leader and became the head of a popular movement through expressing his personality upon men by the means of a book.” It introduced the world to the idea of ‘double consciousness’ and the veil, his most potent metaphor for racism.

The book challenged not just existing ideas white America held about race, Reconstruction, and the memory of the Civil War, but also in its challenge to the ideas of Booker T. Washington. Du Bois drew criticism from Washington’s supporters for this, and the ideological differences between the two men would endure. The problem of the color line has also endured and The Souls of Black Folk remains as relevant today as when it was published in 1903.