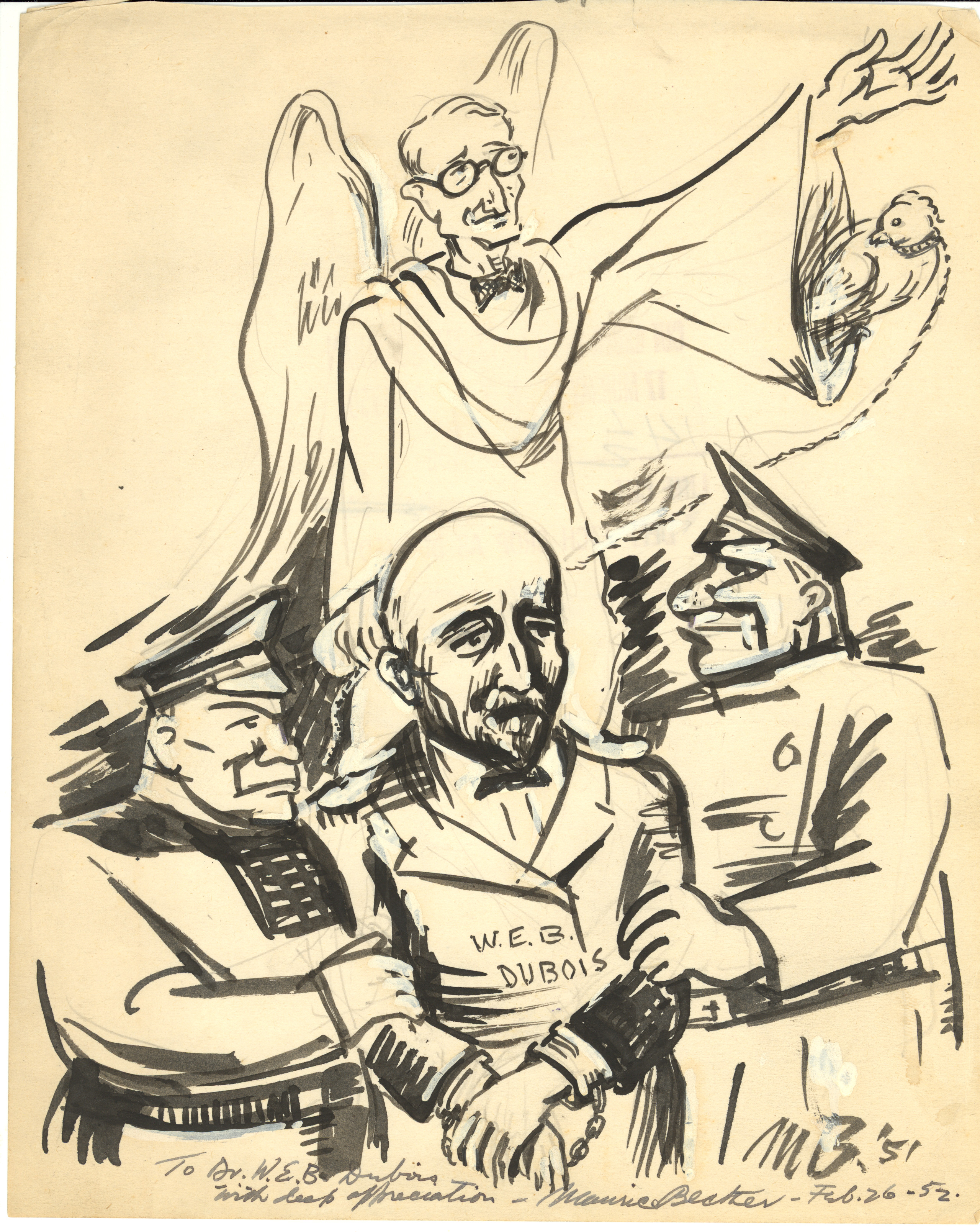 Sketch of Du Bois in handcuffs being held by two Nazi-like security officers and an unidentified man as an angel with a dove coming out of his sleeve. Includes a hand written note from Becker to Du Bois. Drawing originally published in the National Guardian in 1951.

Du Bois wrote that, "I have faced during my life many unpleasant experiences: the growl of a mob; the personal threat of murder; the scowling distaste of an audience. But nothing has so cowed me as that day, November 8, 1951, when I took my seat in a Washington courtroom as an indicted criminal." This cartoon, by Maurice Becker, was published in The National Guardian in 1951.

It depicts Du Bois in handcuffs, flanked by fascist-looking guards. It is a powerful image, and not far from the truth. Du Bois really was put on trial in 1951, and he really was handcuffed at his arraignment – at the age of 83. He was guilty of no crime but had circulated petitions protesting nuclear weapons and was the chairman of the newly created Peace Information Center. Against the backdrop of anti-Communist paranoia and McCarthyism, Du Bois was accused of acting as an agent of a foreign state.

The case was ultimately dismissed – Albert Einstein even offered to appear as a character witness for Du Bois. The damage was done, however. Du Bois’s passport was confiscated and held for eight years. He was unable to travel abroad and attend conferences devoted to peace and anti-colonialism. The trial hurt him financially and did terrible damage to his career and reputation.

It was nothing short of a political assassination. Du Bois wrote in 1952: “What turns me cold in all this experience is the certainty that thousands of innocent victims are in jail today because they had neither money, experience nor friends to help them. The eyes of the world were on our trial despite the desperate effort of press and radio to suppress the facts and cloud the real issues; the courage and money of friends and strangers who dared stand for a principle freed me; but God only knows how many who were as innocent as I and my colleagues are today in hell.”