One of the greatest debates ever held, 1929 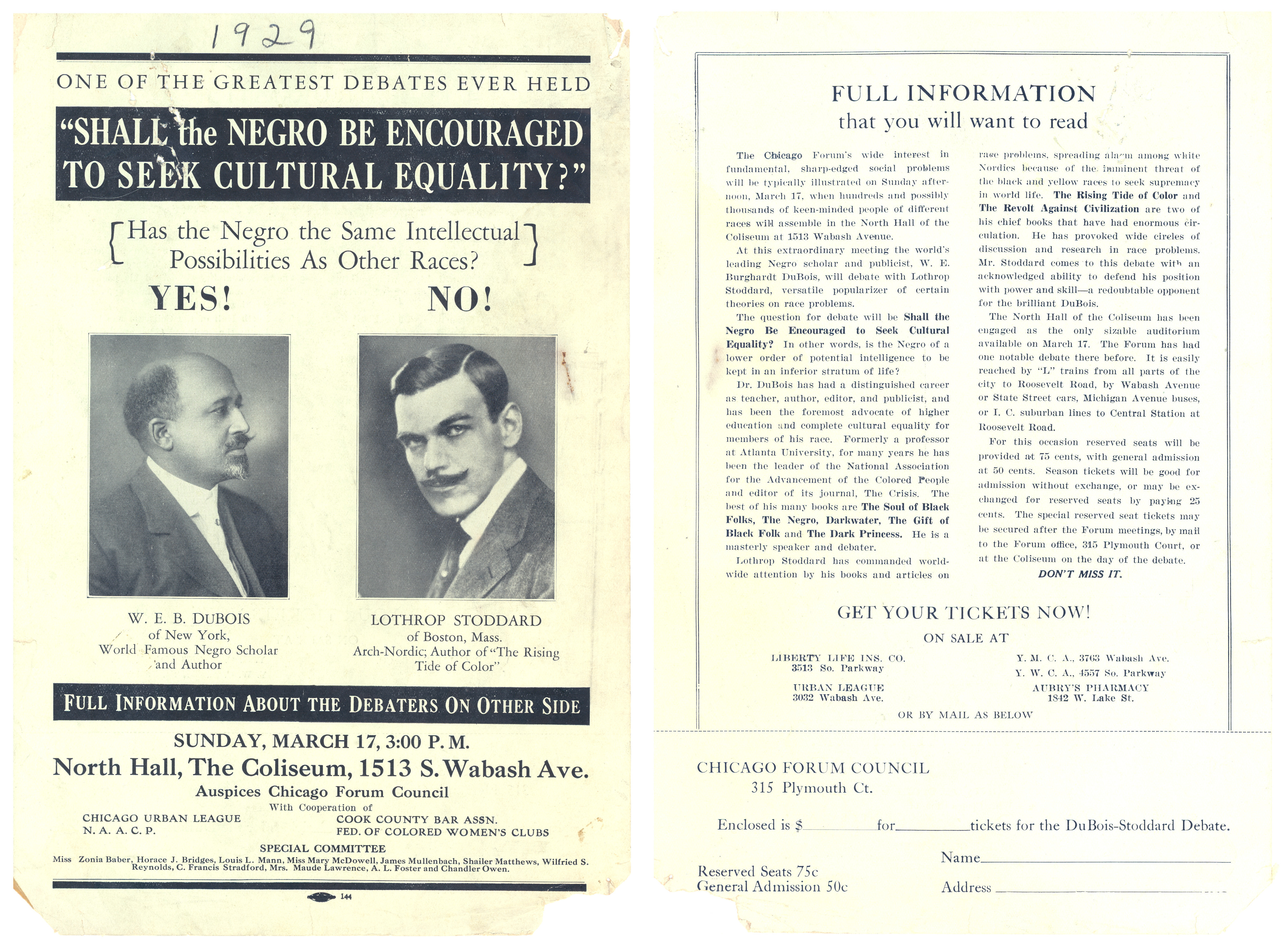 Debate will cover cultural equality; "Shall the Negro be encouraged to seek cultural equality? Has the Negro the same intellectual possibilities as other races?" W. E. B. Du Bois says yes, while Lothrop Stoddard says no. Notes the credentials and main beliefs of the two speakers.

This poster advertises a debate that took place between W. E. B. Du Bois, and Lothrop Stoddard on March 17, 1929 in Chicago. The questions to be debated were: Shall the Negro Be Encouraged to Seek Cultural Equality?” and “Has the Negro the Same Intellectual Possibilities As Other Races?”

As you can see, Du Bois argued “Yes!” to these questions, while Stoddard argued “No!” But who was Lothrop Stoddard? He grew up in Brookline, Massachusetts, attended Harvard like Du Bois and was a prolific writer. That is where the similarity ends. His 1920 book The Rising Tide of Color Against White World-Supremacy underlines the central theme of his work, that of an imminent race war between the nonwhite people and the, supposedly superior, ‘Nordic’ race. His arguments were buttressed by the kind of eugenicist social-Darwinism that was unfortunately considered legitimate science by some quarters.

Du Bois did not agree, dismissing Stoddard as a sociologist of no standing and “a popular writer who has some vogue just now.” Nevertheless, Stoddard’s work was popular, his fame increased, and Du Bois rose to challenge him. Tickets for the 1929 debate sold for 50 or 75 cents and the hall was packed with thousands of spectators. Du Bois coolly dismissed and demolished Stoddard’s arguments, by making an essential and irrefutable argument for “essential human equality”. Of the supposedly superior ‘Nordics’ Du Bois said: “Their program is the subjection and rulership of the world for the benefit of the Nordics. They have overrun the earth and brought not simply modern civilization and technique, but with it exploitation, slavery and degradation to the majority of men. They have been responsible for more intermixture of races than any other people, ancient and modern, and they have inflicted this miscegenation on helpless unwilling slaves by force, fraud and insult; and this is the folk that today has the impudence to turn on the darker races, when they demand a share of civilization, and cry: “You shall not marry our daughters!” The blunt, crude reply is: Who in Hell asked to marry your daughters?”

Stoddard did himself no favours by trying to describe a ‘bi-racial’ theory of separate but equal races in front of a majority black crowd all too familiar with conditions in the Jim Crow South. The audience actually erupted in laughter at Stoddard’s suggestion that “the more enlightened men of southern white America…are doing their best to see that separation shall not mean discrimination; that if the Negroes have separate schools, they shall be good schools; that if they have separate train accommodations, they shall have good accommodations.”

In his rebuttal, Du Bois ended by wondering whether the mistake that white supremacists make is believing that civilization is a gift bestowed by an élite, and not derived from “the masses of ordinary people.” His victory in the debate was unquestioned and the news of it spread fast. A headline the next day read: “5,000 Cheer W.E.B. DuBois, Laugh at Lothrop Stoddard”. Soon requests came in to restage the debate in other Northern cities. Du Bois agreed but, perhaps unsurprisingly, Stoddard declined the invitation.