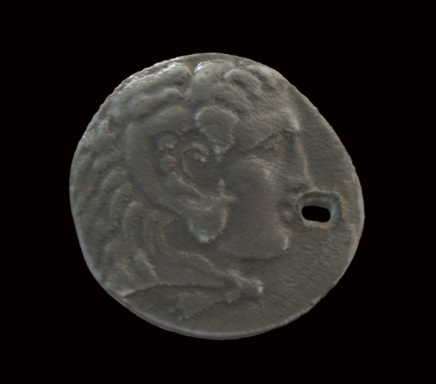 Ancient coins were never the size of this enlarged replica. Most were rather small, less than the size of a United States quarter. The original silver coin is exhibited in the gallery and dates to about 300 BC. It was a standard of exchange used over a broad territory from Greece to India during and after the reign of Alexander III of Macedon, who is better known as Alexander the Great. This particular coin was minted in the region now known as Lebanon, more than 20 years after his death. Can you see that Alexander is wearing a headdress? It’s in the style of the Greek demi-god, Herakles who wore a lion head and skin. Alexander considered himself a descendent of Herakles, and offered sacrifices to him during his many military campaigns.

By the age of 30, Alexander had conquered most of the lands between Greece and India, becoming a legend in his own time, but he died only a few years later. Although his empire ultimately was divided among his senior generals, the economic and social networks created by Alexander helped to spread Greek language, culture, and people throughout the regions he conquered.

The hole in the coin was drilled in antiquity, probably to test the purity of the silver.