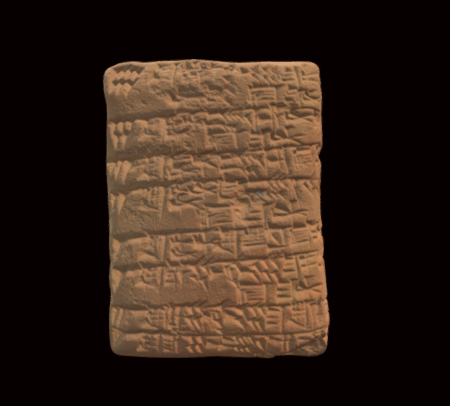 This replica is an enlarged reproduction of the 21st century BC clay tablet exhibited in the gallery. The text is hand written in the Akkadian language using cuneiform. It records the delivery of 32 pairs of high-end sandals and boots to the central administrative town of Puzrish-Dagan (that’s an archaeological site near Nippur, in what is now southern Iraq). This footwear had been crafted by expert leatherworkers, using materials imported from different suppliers across Mesopotamia and Arabia. The king gave the finished sandals and boots as prestige presents to members of the royal household and as diplomatic gifts to foreign dignitaries. Tablets like this one are critical in helping scholars piece together details about all aspects of society thousands of years ago. When recovered from a known archaeological site, the information revealed can illuminate the very lives of the city’s residents.

If you want to try reading the ancient language written on this tablet, the first line of the text translates as “7 pairs of green boots with linen decoration”. The first character in the upper left-hand corner of the tablet is the number “7”. We have colored it in to help you find it. Any guesses about the number below that, in the next line? Here’s a hint: Count the number of wedge-shaped impressions.