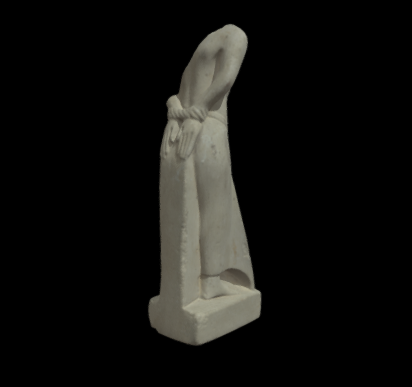 I’m sure that you noticed this Egyptian replica is incomplete. Although the statuette is missing its head, it clearly shows a barefooted male in a long skirt, stripped to the waist with his wrists bound behind him. The original statuette probably represents a prisoner of war and dates to the Ptolemaic Period, which is more than 2000 years ago. The motif of bound foreign captives was a recurring element in ancient Egyptian art. Many prisoners of war were forced to work on royal construction projects or on agricultural estates, but others were more fortunate. Although technically not free, those with particular skills or experience were entrusted with specialized or even important tasks.

Enslavement existed in various forms across the cultures of the ancient Near East and Mediterranean, for millennia. Men and women were enslaved as prisoners of war (as depicted in the statuette), as punishment for crimes they had committed, or for debts they could not pay. The position of slaves in any given ancient society varied greatly, however. For some, enslavement was a virtual death sentence, but for others there were limited legal rights, and even the possibility to be freed.